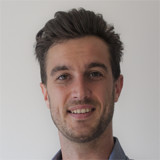 The LookAt function was originally part of the OpenGL Utility library (GLU), an utility library for OpenGL that is now outdated. The function was used to update the internal model-view matrix using the LookAt camera model. With the release of version 3.0 in 2008, OpenGL moved away from the fixed function pipeline, which is often referred to as legacy OpenGL now, in favor of a programmable, shader based, pipeline. This meant most concepts and elements concerning the fixed function pipeline were declared deprecated, including the LookAt function from the GLU library.

In a programmable pipeline there is no internal model-view matrix, we have to manage the matrices ourselves and load them to our shaders when necessary. This means we need to create our own LookAt function if we want to use the LookAt camere model. The source code for the function is quite short as shown below.

First we create the z-axis basis vector by subtracting the eye vector from the at vector. We now have a vector that defines the displacement from the position where the camera is looking at to the position of the camera. All we need to do now is normalize the vector to get the first basis vector.

The z-axis basis vector we computed is pointing in the direction of the camera, but as we stated above it should be pointing in the opposite direction. This means we have to negate the z-axis basis vector we computed. However we will do this after computing the other two basis vectors. In effect we are create a left handed coordinate system with the x-axis pointing to the right, y-axis up and z-axis in the direction of the camera. Finally we will transform this left handed coordinate system into a right handed one by flipping the z-axis.

To compute the next basis vector we will use the cross product, this yields a vector that is perpendicular to the original two vectors, which is exactly what we need. The order of the vectors is important as this determines in which direction the perpendicular vector will point. We can determine in which direction the vector will point by using the right hand rule, right hand because we are working in a right handed coordinate system. We also need to normalize this vector because the up vector might not be a unit vector.

We will compute the third basis vector by taking the cross product of the x-axis and z-axis basis vectors. It’s possible that this vector is the same as the up vector that was passed as argument, but only if it is a unit vector orthogonal to the vector from eye to at.

Now we can negate the z-axis to become a right handed coordinate system with the camera pointing in the negative z direction.

It’s important to keep in mind that the order of multiplication matters. OpenGL uses column vectors by default, this means we need to read matrix vector multiplication from right to left. So in the above example the linear transformation would be applied first and then the translation.

We now have enough information to create the view matrix.

Finally, in code this becomes:

This concludes our overview of the LookAt function. If you have any questions feel free to leave a comment below!